This article originally appeared on pac.org

You recently published European Corporate Affairs Remuneration Report, which you wrote with the Council. The report looks at the salaries of lobbyists in the EU, and other reports indicate that there are 25,000 lobbyists in Brussels alone, maybe twice that elsewhere in Europe. Why the imbalance?

The Transparency Register requires lobbyists to register, and that is why we have such an accurate accounting. About 2,500 of the lobbyists in Brussels work for corporations, with 2,000 for consultancies, like APCO, my former employer. More than 13,400 work in European trade and professional associations implementing supporting public affairs activities. An additional 10,000 lobbyists travel regularly to Brussels by train from nearby cities such as Paris, Amsterdam or London or by plane. The biggest corporate spenders in Brussels are U.S. companies with the U.K. and France right behind.

What are the most newsworthy findings from the study?

I can tell you what the European media thinks is newsworthy — the 16 percent pay discrepancy between men and women lobbyists. The gender pay gap is a hot topic here, as I understand it is in the U.S. as well.

What can you tell us about how the U.S. is now perceived in Brussels and Europe generally?

Well, Donald Trump is not a popular person here, for his anti-globalist and America First rhetoric. While Trump himself might not be popular, Europeans know that America is bigger than Trump and that American business is still huge here. I find France’s love-hate relationship with the U.S. kind of amusing. The French can say whatever they want, but they still watch American soaps on TV and go to the mall to buy American clothes. They are also huge consumers of McDonald’s. And I say all this being part-American myself.

I was born in London and raised in a small cathedral city called Ely, near Cambridge, but I’ve been living in Brussels since 1993. But my grandfather was from Front Royal, Va., in the U.S. Infantry. He was one of the Americans who landed at Omaha Beach on D-Day. My grandmother was a nurse in England, and they met while he was there training for the invasion.  My other grandfather was Canadian and joined the Royal Air Force in 1939. Thanks to Brexit I am now a Belgian citizen, such are the consequences of geopolitics!

Any trends you see developing that American public affairs professionals should keep an eye on?

I’ve worked in Brussels now for 25 years. I opened APCO’s office here in 1995. Back then, to succeed here you needed to speak French, then it was English. Today, because of Brexit, the U.S. is losing its most important ally here. Anglo-American influence is declining in Brussels, while the Franco-German relationship is becoming more important. And as an executive headhunter here in Belgium, it is harder now to get Brits in senior leadership positions. Many organizations today want someone who is or speaks German. 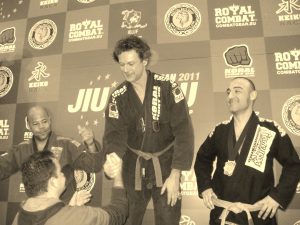 What other do trends you see?

In this sense, yes. I had to learn focus at an early age. I was the British student judo champion in 1990, and since then I earned five black belts in various martial arts. I trained in Brussels with Jean-Claude Van Damme. The last time I actually competed in kickboxing was 10 years ago, when I was 40. Then I decided getting hit in the head was probably not good for my career. So I took up Brazilian jiu-jitsu, where you don’t get punched in the face. We had a good year at Ellwood Atfield in 2017, and my colleagues asked me to account for it, and I remembered something basic about martial arts and physics. Force equals mass divided by area. In martial arts, that means if you punch with two knuckles instead of four, your punch has greater force because you have diminished the area, meaning the size of the target. In work, you can increase the force by focusing very tightly on the target. Also key is what, in martial arts, is called “mat time,” which just means constant practice. So you practice, you work hard and you focus. That’s the application of martial arts training to work.